The Dutch Masters with your private art historian

Private tour in the Rijksmuseum

Private tour in the Rijksmuseum

The Rijksmuseum is by far the largest museum in The Netherlands. Its collection is a must see for every art-lover who visits Amsterdam. It is also the best place to follow the rise, fall and legacy of the Dutch Republic in the 17th century. On our private tour in the Rijksmuseum you will get acquainted with the key moments in Dutch history as well as its most important artworks. Immerse yourself into Dutch history and art with one of our private art historians.

In the Rijksmuseum we offer a crash course on the history of the Dutch Republic in the 1600s. See how the mercantile society of the Lowlands took up arms to strive for independence. How this young republic became one of the world’s most influential powerhouses. Meet the key players of the Golden Age, people such as: Prince William of Orange, Admiral Michiel de Ruyter and leading intellectual Johan de Witt.

A Golden Age of art

Get the stories behind Johannes Vermeer’s quiet Milkmaid, Jan Steen’s messy (and quite hilarious) households, Albert Cuyp’s lush landscapes, Rembrandt’s mysterious portraits and Frans Hals’ civic guards. What makes the art from the Dutch Golden Age so particular, so different from other places and eras? The Rijksmuseum is by far the best museum to talk about the Dutch Masters of the Golden Age.

Van Gogh and the Dutch Impressionists

The Rijksmuseum has a strong accent on 17th century art. The late 19th century however, formed a ‘Second Golden Age’. Artists like Vincent van Gogh, George Breitner and Anton Mauve ushered in a whole new era of art. What was their connection with the Dutch Golden Age and the French Impressionists?

‘The Rijks’ is more than a museum. It’s an institute for art and culture. During your Rijksmuseum tour you will learn more about its many other functions and the eventful history of the building itself. Architect Pierre Cuypers created a completely unique cathedral for Dutch art that has been as revered as it has been despised, since the moment it opened its doors in 1885. We will reveal many of the secrets of this enthralling museum during this private tour. 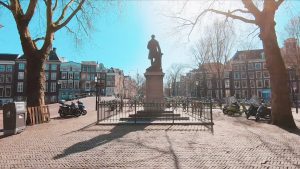 We'd love to hear from you

As private guides, we gladly adjust to your preferences. It’s your tour!
Please let us know about your wishes and interests.
How can we offer you a great Amsterdam experience?

Send us a Message