The origins of Amsterdam

On the Medieval Amsterdam Tour we dive into the earliest records of the city. You get a deeper insight on the historical center of Amsterdam. How did the city start off and what does it say about modern Amsterdam Today?

Get a better understanding of the sources of Amsterdam’s tolerance and pragmatism. Walk in the footsteps of Rembrandt; see a different side of the red light district; find the soul of the city.  Have a great first impression of Amsterdam.

The earliest history of Amsterdam

Starting in front of the Central Station we walk into the alleyways of old Amsterdam. What does the oldest document mentioning Amsterdam say about Amsterdam today? The Dam is where it all started for Amsterdam. Who were the first settlers and why did they choose this place? And how come the Dam marks both the beginning and the end of the middle ages in Amsterdam?

Amsterdam, a city emerged from a swamp

We introduce you to the architecture and urban planning of the oldest parts of Amsterdam. Why do the houses lean over and how is Amsterdam built up? Learn how the city was defended against its enemies. Also see what is left of these antique structures.

The old harbor of Amsterdam

We aim to revive the bustling harbor front at the Amstel and IJ. Porters, carriers, seagulls, carillons, the smell of fish, tar and ropes. Why was this location so strategic for trade? Which inventions led to the growth of Amsterdam?

Which role did religion play in Medieval Amsterdam? Is there a continuous tradition? How religious is Amsterdam today? Find out more about the Dutch liberal mindset towards things that are oppressed elsewhere. How does the Red Light District ‘work’ and how did it evolve over time?

Walk along the many former monasteries and see their current function. How is Amsterdam’s monumental heritage preserved? And what are the latest discoveries?

In the city’s oldest courtyard we talk about the legends of Amsterdam. What’s the story behind the three crosses everywhere? What miracle made Amsterdam become a major tourist destination?

End of the Middle Ages

We can determine to the exact date on which the Middle Ages ended for Amsterdam. What happened on that day that had such a profound impact on the development of Amsterdam? 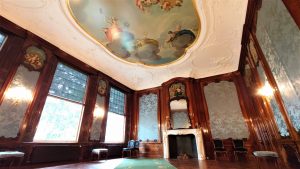